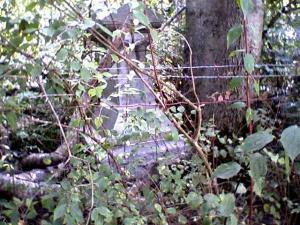 I‘m hot on the trail of a mystery of sorts. Last weekend I went to a lovely wedding in Fayetteville, Arkansas. I’m unfamiliar with the city, having only been there years ago for Advanced Placement Workshops. Pretty place – all Ozarky and such up in the hills. The University of Arkansas in Fayetteville is the Home of the Hogs, in case you’re confused. WooPigSoooey and all that.

The wedding took place just outside of town at a sweet place called Stone Chapel. It’s apparently quite the hotspot for young graduates and other locals to marry off and to each other. The quaint chapel was built ages ago by some moneyed man who wanted the perfect place for his daughter’s wedding. That’s all the story I could get from anyone, and they all seemed satisfied with that being plenty.

Don’t you hate it when someone gives you half a story?

Click on the website and what you won’t see is a jungle-thick acre of land somewhere off to the left of the chapel. Parking was up next to the rusted barbed-wire fence that held it tight and we had to carefully avoid hitting stones as big as lidded cake-plates to squeeze next to the fence.

No big deal. Folks who live out in the country always have an unsightly side of the house. It’s like buying fresh Christmas trees (if anyone does that anymore), they’re always a little wanky and you have to redirect all your tinsel to the good side.

The tinsel at Stone Chapel was a huge, lovely covered reception area. Tables and flowers and toddies and such – it was delightful. So delightful, in fact, that I walked halfway around the overgrown acre without paying a lick of attention to it.

But two hours is a long time, folks.

I talked to just about everyone in and out of the wedding party within an hour, so I began talking to the big security guy who stood like a mountain on the periphery of the jungled fence and watched everyone behave perfectly. Interesting fella, really, but not as interesting as what I finally noticed behind him.

That picture above is, of course, taken with my sorry cell phone camera. You can still make it out, though. There, just beyond the large security man and on the other side of the barbed wire, was a seven-foot headstone. My new friend and I tried like hell to read the name on it, but the inscription was facing the large tree. In fact, it appeared that someone had planted it there on purpose. The tree’s base had grown around the bottom of the headstone in an eternal hug.

Beyond that – and it was mighty thick in there – I saw two more headstones just as tall. That little acre was an old cemetery, right there in the middle of everyone’s wedding and a stone’s toss from the reception toddies.

Now, I wasn’t dressed for giving this acre a proper going-over. Not to mention the barbed-wire business and that friendly but no-nonsense security fella. I don’t worry about my family, they’re used to my little oddnesses, but I didn’t want anyone bailing me out of the pokey on my cousin’s special day.

With about forty-five minutes until marital blast-off, I began stalking the perimeter. Those big rocks we’d avoided when parking? They were ancient unmarked gravestones, worn lopsided and pitted by weather. We had parked, if you can believe it, up against a wall of overhanging limbs sheltering a sort of mini-burial place. The growth was so thick that it took me quite some time to make out ornate iron fencing that marked off a 10′ by 20′ rectangle within the larger acre. I counted nine small headstones, but there could have been more.

A children’s plot. The rusted iron fencing looked for all the world like a discarded crib.

I gathered myself together and went back to my people, stood and sat when I should, smiled for photos, and cried just like everyone else when the young couple made promises to one another. Weddings are hopeful events, and this one was more hopeful than most. Afterward, we all ate and danced and admired the newlyweds.

The seven-foot headstone watched the whole reception from behind the security guard, as I’m sure it does almost every weekend there at Stone Chapel. Wedding after wedding, and no one the wiser.

Note: I’ve contacted the Washington County Genealogical Society and they have no record of the cemetery. No one knew it was there. But they’re looking at it now, and should get back to me soon to tell me the other half of the story.

30 thoughts on “Whistling Past the Graveyard”