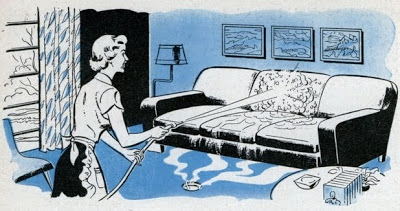 “Because everything in her home is waterproof, the housewife of 2000 can do her daily cleaning with a hose.” – via Foresight Culture, Popular Mechanics 1950

Does anyone remember Naugahyde? My mother had a harvest-gold couch covered in the stuff and it remained indestructible until we yard-saled it sometime in the late 70s. It was impervious to spills and stains. It stuck hermetically to the backs of our legs so that rising from the nauga-couch in the summer snatched off a layer of skin. It was almost atomic and just about the grooviest piece of furniture my mother ever vacuumed under.

I even had a Nauga-monster, which the company still makes. I’m not sure why I had one, and I’m truly confused why anyone wants one now. They’re cold and uncozy until they warm up near you and become That Doll You Peel Off of Your Face.

Wistful memories aside, I’m not ready to go nauga-retro just to ward off an errant stain or two. Besides, there’s no built-in storm-drain in my living room floor. Not that it wouldn’t be handy.

I’m also not a housewife, so there’s that. Even if I were a housewife, I’m not sure I’d feel comfortable about spraying water willy-nilly from a garden hose all over my living room. The ad-men on this little project must have imagined a bookless, magazineless, clothless world. Great in theory, but not in any house I’ve ever lived in.

I won’t even talk about what a cleaning ritual like that would do to a hair-do that took two hours once a week at the local beauty shop, and was meant to last from one visit to the next. There’s not enough Aquanet in the whole world to make that right.

Of course, she’s smiling. Since those were the days before anti-depressants became all the rage, I’m putting my money on Valium or one of its cousins as Mother’s Little Helper. Anyone want to hazard a guess?