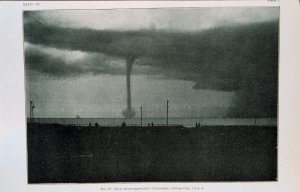 I knew it would happen. I wrote tornado stories for four days and I conjured one. Maybe more. Dammit.

We’re used to tornado watches around here, so that’s not much of a scare. I generally don’t grab my purse until the sirens actually go off, and only because I have my daughter and grandson here. If I were alone, you can bet I’d be out on the porch right now watching for funnel clouds between lightning flashes. My daughter – normally a rock – tends to get a little anxious about my standing outside during tornado weather. She’s never quite shared my fascination.

Maybe in twent-um, thirty years when I reach retirement age, instead of volunteering at the hospital or making people crazy by driving 15 miles per hour down Donaghey Street, maybe I’ll become a storm chaser. Imagine! I could load up the Avalon with a thermos of iced tea, my makeup bag, and some binoculars. Off I’d go. I could take pictures of the twisters on my cell phone and send them off instantly to CNN, because I figure in thirty years I may actually know how to work a damn cell phone. The Perfect Grandson and all his friends would mention me in hushed, reverent tones imagining me to be the coolest Grammie alive.

“Let’s go over to Levi’s house and watch his Grammie chase tornadoes on CNN!”

You have to agree that beats the hell out of greeting pre-surgery patients in the hospital lobby. Wearing a smock, no less.

Enough daydreaming. Since it looks like I’m going to be up half the night waiting for watches and warnings to pass, I might as well get to work on the tornado stories. Besides, I left Chesaleen clinging frantically to the underside of a horsehair divan, and I suspect someone needs to come extricate her.