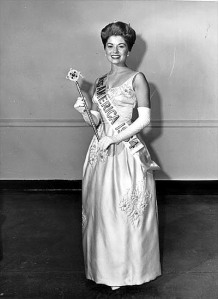 Donna Axum, Miss America 1964 and an Arkansas beauty even now, must be weeping uncontrollably.

If you watched the Miss America pageant you know it’s the end of an era. Pageants are serious business here in the south, and no matter how many of us raised our perfectly manicured collective fists in the air for women’s rights over the past few decades, we still hang on. We’re not afraid to call them beauty pageants instead of “scholarship contests” because that’s exactly what they are. Ugly girls don’t become Miss America. Never will.

I’m not one of those crazy pageant moms, and I have strong feelings about those who doll their four-year-olds up like pole-dancers to win trophies. Let’s be clear about that. I also know that all those pageants a gal must win in order to slick Vaseline on her teeth at the Miss American showdown can be, well, less than a perfect feminist learning experience.

I recall with fondness attending the Faulkner County Fair Parade a few years ago, watching all the local first-tier pageant winners load up in their daddies’ mid-life crisis convertibles. All those sequins. Except for one gal sitting in the back of a torn-down Mustang. The Conway High FFA Queen was cut from another bolt. In a sea of pastel spangles, Miss FFA wore black – fingernails, hair, and all. She had a nose ring and bruise-red lipstick and a smirk. When it began to rain and widespread hairspray-panic began, Miss FFA just lifted her face to the sky and let her dark eyeliner run. I couldn’t help but admire her.

I’m certain, though, that if I’d paid closer attention I’d have noticed her mother scampering out of the rain with something over her head. It’s generational.

Look – I read The Women’s Room

and The Feminine Mystique

and all versions of both that came after, as did every other girl who lived in Conway Hall at the University of Central Arkansas back in 1970-mumble. Southern women of a certain age have a feminist history, but it doesn’t include failing to shave under our arms or leaving the house without applying lipstick. The New and Improved Miss America pageant, understandably, leaves us gasping for that very reason.

The sudden casual air seemed to take a few of those contestants completely by surprise. And the “makeover”? I’m trying to imagine looking Miss Texas in the eye and telling her she needs to tone down that hair. Or worse, cut it. Those contest folks just told The Southern Woman that she’s not northern enough to win a beauty contest, and some will take that personally. Texas, Alabama, Mississippi, and Arkansas could actually secede from the union.

I guess I’m too old. I still want to watch a Miss America pageant complete with ballgowns, taped butts, and someone twirling fiery batons while singing Amazing Grace. Sorry, Donna. I guess those days are over.

9 thoughts on “The Miss America Pageant ..oh my”