Antoinette wears her skirt too short for some and her voice too loud for most, but she takes coats, seats patrons for light suppers before the symphony and has history with too many married men who glide their Blackglama’ed wives with a light hand to their seats while giving Antoinette a brief nod that says, yes, I know us, I know you’ll say nothing, of course I’ll call.

She wants to know who recommended us so I tell her, and even though she hesitates, there is a smile as she scribbles a note inside a matchbook that I don’t read then or even later when I slip it into my coat pocket. 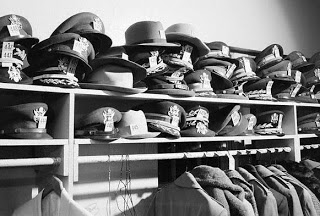 When I see the doorman the next day it occurs to me he looks more like a fireman than a doorman, so when I call him aside, tell him, this – offering the pocketed matchbook from Antoinette at the Café Allegro – this is for you, he takes it with confusion until he reads the note and smiles like a man who’s known Antoinette far away from the Café Allegro and far away from the curb at the William Penn Hotel where he hails cabs fiercely like he’s fighting a backdraft, and I see the history of their night or their week or that one regretted refusal settle on him before he says, thanks, and looks on the back of the matchbook for a continuation that isn’t there, that even he doesn’t expect, and again he says, thanks, and I look away because their history is something I stole and it’s lonely shoplifting moments from someone else’s life.