We cross our bridges when we come to them and burn them behind us, with nothing to show for our progress except a memory of the smell of smoke, and a presumption that once our eyes watered. – Tom Stoppard

And it still might have passed without a word from me, except that two things happened willy-nilly that made me shed a little residual love-bitterness.

The first one was a Facebook request. Please keep in mind that I only joined Facebook a few years ago to make class groups for all my students. I quickly found that while they never check their email, they live and die by Facebook. It’s a teaching strategy and it works. Since then, Generation Jones – the check-writing parents of all these students – invaded Facebook and hijacked collegiate sovereignty from their kids. Suddenly, all of these people I haven’t thought about since high school started popping up and asking me to “be their friend.” I’m not comfortable with mixing my professional and private life on Facebook, so I’m a pretty lousy “friend.” My students don’t need to read any “remember the time we…” on my wall, for instance.

But back to the request. I logged on the other day and there is a request from John, the first boy I ever kissed and meant it. Seventh grade. Behind the lockers. I don’t need to recreate this moment for you because we all have this flutter-heart moment at least once. It’s pure and young and lives forever in an unsullied place no matter how cynical we become. John and I were beautiful and then he moved away. All that sneaky practice-kissing and playing at love without the pain of junior high infidelity or break-up dramatics. He simply moved away and left all this delicious longing. Most of the boys after that weren’t so kind. Neither was I.

I checked his profile and John is everything he should be, I guess. Married, father of four, a Republican. He’s an insurance adjuster and his favorite book is the Bible. A textbook-perfect Southern treasure of a man. Not for me, necessarily, but for the type of woman who is now Mrs. John.

The second thing actually happened over a month ago, but I filed it away quickly because it was too much to think about at the time. John and Facebook made me think about it finally and for good.

At UCA, we have a composition celebration of first-year writing students called AfterWords. It’s an opportunity for freshman comp students to share their writing with each other and compete for cash money prizes. The whole process wraps up with a day or two of public readings and is quite a good idea.

One afternoon during the celebration while students were taking turns reading their crafted narratives behind a podium, a sweet young thing stepped up and broke all our hearts by reading a very personal and gut-wrenching account of her reckless, wayward father and the day he died. The poor child had a difficult time getting through the reading and I didn’t blame her one bit. It was clear, however, that her pain and anger required voicing. I wept with her as she bravely read.

At one point in the narrative she and her sister stand in front of his headstone, and she reads her dead father’s name as if to conjure or damn him or both. Jay _______.

What are the odds that a sweet boyfriend I loved 33 years ago would later marry, have a daughter who by chance attends the very college where I teach, who then writes a story for a competition, and reads it in the very room where I sit as audience when she finally reads the anger he’s given her? My sweet boyfriend when I was fourteen became an addict and a no-show father. He died from the failures he became and that I never saw coming. Jay was 49.

You can understand why I filed it away. I’m still unsure how to process that kind of coincidence.

The boys I loved are men now and some are dead. They are special because I can freeze-frame them individually at the age they were when I loved them, before they became the men I couldn’t really love or the ones who would tear my heart out. These boys belong to me and I can replay each of them at their best, at my best, the 8mm camera in my head selecting only the loveliest parts of us.

So today I’m giving my inner love-cynic a rest. I’m putting down all the baggage and recursive disappointment and I’m going to put my feet up, thread the projector, and allow the prettier times to cast their smiling shadows on the wall. 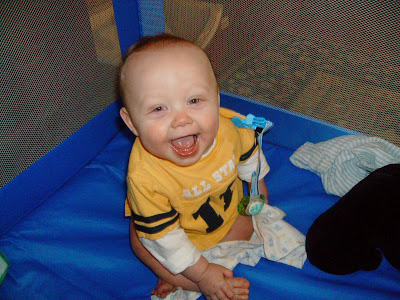 The perfect grandson, my valentine. Keep your fancy flowers and Godiva chocolates, keep your dinner out and dainty diamonds. This boy’s smile is all I need.

Well, that and a little cloth to catch the drool. He’s a leaky miracle and I am complete. Happy Valentine’s Day, little man. 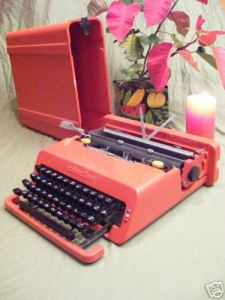 It’s almost V-Day, so get your plastic out and start buying. Since I waste a little bit of time each and every day on Ebay, I thought I’d share a few Valentine-specific goodies, like this Olivetti Valentine typewriter, circa 1969. If you don’t plan on spending at least $250 (that’s the bid right now), there’s another one coming up in a few days. These things have fast become groovy collector’s items, and it’s obvious why. If you sit behind this typewriter very, very quietly, you can almost hear “spill the wine, dig that girl” coming right out from under the hood.

Since both Olivettis will probably go for more than most of us want to spend, you can always feed the typewriter fetish with this vintage Royal Quiet Deluxe. I realize that “quiet” means something different to laptop users, but these are 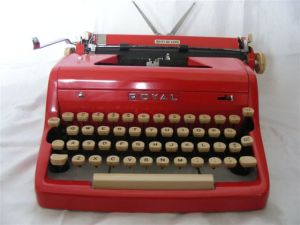 nifty little machines. This one has a little over a day left and is a tad over $40 right now. Theres a pricier one coming up later, so if you want to prove your love a little more cheaply, now is the time. I love the paper holding “ears”- kind of like the antennae on that portable television Mom used to put on a TV tray. You remember, back before cable.

Every writer needs another journal. It’s the pure intoxication of a virgin page, and no matter how many we already have it never hurts to have just one more. I’m a Moleskine and

Chemistry Notebook gal myself, but some of the leather journals are just too delicious to pass up. This Fiorentina journal is crafted, not made. I sigh at such beauty, and I’m perfectly convinced I’d write better in one. Especially with a fountain pen.

I know better than that. As entrancing as those beautiful and expensive fountain pens are, I just can’t stand to write with one. I know there are rabid collectors out there who’ll tell me I just haven’t bought the right pen. Save your strength. Nothing writes like a $1.97 Uniball Signo 207. Nothing.

If you really want to impress on Valentine’s Day, you buy an obscenely large diamond. That’s easy. If you want to impress a writer, find a little ditty like this. It’s a writing box and every writer should have one. This folk art lap desk is more than just a writing surface – it’s a hidey-hole place to stash extra typing paper, Uniball 207s, and that Fiorentina journal. Keep in mind that if you don’t particularly like this one, Ebay has about fifty others for sale at any given moment. If you don’t buy it for the writer you love or who loves you, then for God’s sake send it to me.