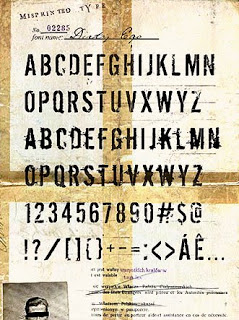 I’ve got quite a few (fairly) harmless addictions. Collecting old manual typewriters, for example, will not land me a stint in some lock-down rehab. I don’t think. I guess dropping a Hermes 3000 on my foot might buy a little time in the ER, although I’m sure I’d be more worried about the typewriter than the foot. At any rate, it’s a harmless addiction as long as I don’t need government bailout money to keep me in fresh ribbon.

One of my other addictions is collecting computer fonts. It’s true. I have thousands and can justify every last one because I’m the faculty adviser for an undergrad literary magazine. The magazine requires layout and layout requires nifty fonts now and then. I might as well share a few fabulous free font sites, because at this point it’s starting to feel like hoarding.

You know, like those people who turn their houses into a maze of newspaper stacks and olive jars. If you opened up my hard drive, I’m afraid that’s what it would look like.

Urban Fonts has a nice collection of the usual typewriter font suspects, as well as some of the more down-and-dirty broken fonts. Some of the classics are Adler, Love Letter, Metalic Avacodo (that’s the spelling), Royal Pain, Traveling Typewriter (cleaner than the others), and Uncle Typewriter. There’s a nice one called My Old Remington that’s a good blend of the clean and dirty – much like typing with a fresh ribbon on a machine that hasn’t been cleaned in, say, sixty years.

Font Parade is a great site for some of the standards Urban Fonts carries, with a few more. Take a look at Dislexi, Fox Script, Hammer Keys (a favorite right now), Junko’s Typewriter, Maszyna, and Type-Ra. Those of you who have special love for that blocky, sci-fi look some Hermes 3000s have can download Typewriter a6o2. Not my thing, really, but it might be yours.

One of my favorite font sites right now is Misprinted Type. Some of these are typewriter fonts and some are just plain art, but you simply must stop by and take a look at the free offerings as well as the buy-only fonts. The picture above is Dirty Ego, but you should also check out Astonished, Print Error, and Horse Puke. That’s right, Horse Puke.

Just because you may or may not have a functioning manual typewriter is no reason not to have typewriter font-love. God knows you miss out on the overall aesthetic clank and zing delight of the old beauties, but you can be forgiven. The real thing can be pricey. During WWII my grandmother painted eyebrow pencil lines down the backs of her legs to mimic stockings. It’s the same principle.

By the time this recession is over, I figure jewelry maker key choppers will have “recycled” too many old typewriters. Collecting whole machines will be iffy at best. It’s good to have the fonts as a backup should – God forbid – we have to typecast in eyebrow pencil.