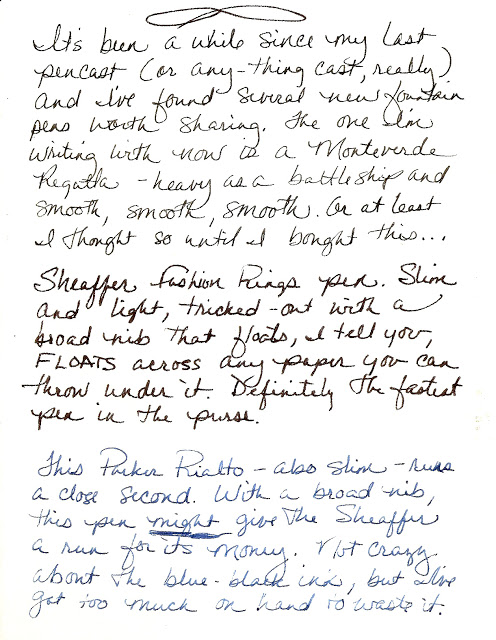 For something to be truly vintage, it has to be at least 30 years old. I\’m not sure if that\’s a hard and fast rule or if I just made that up, but there\’s something distasteful about using \”vintage\” to describe anything made after, say, the year I graduated from high school. These pens are nearly vintage, meaning they don\’t make them anymore and probably haven\’t for a while.

That hefty monster in the middle is the Monteverde Regatta. Made from pig iron or something like it, it\’s definitely a fountain pen you want to use unposted. The shame of it is that the cap screws neatly onto the end. This fountain pen is surprisingly easy to move, though. It\’s a sweet medium nib that\’s smooth even in the Moleskine. I found this one on closeout at Office Depot for $14. They\’re getting rid of all their pricey pens at OD, so hit the store soon.

My adorable blue Sheaffer Fashion Rings pen is a throwback to the early 80s when most fountain pens went skinny. The broad nib is decisive – almost a bit much for my thin-lined Moleskine paper, but I don\’t care. There is no pen faster. It came with a lovely matching ballpoint via Ebay  – I think the seller has a few more sets, one in orange. 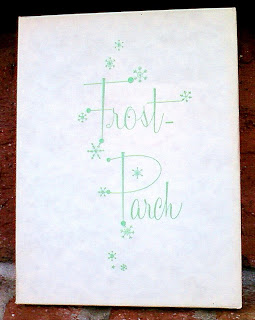 Ah, the Parker Rialto. I\’m addicted to Rialto ballpoints, with their snappy caps and perfect weight. Again, thinnish and 80s to mid 90s, but the prices can be tragic. I was lucky with this red Rialto, which somehow rode under the Ebay radar due to misspellings in the listing. Smooth medium nib even on the Moleskine.

All of these pens came with converters. While I\’d love to go crazy buying bottled inks in dazzling colors, there\’s a three year-old boy in this house and I know better. I\’ll stick to cartridges for a while.When you see the train coming, it\’s best to avoid the tracks, is all I\’m saying.

Any skittishness in the pencast above is the sole responsibility of this Frost Parch stationery I found yesterday while milling around Little Rock. Pretty parchment, fails to drink the ink for some reason. It\’s pretty held up to the light, though. At the end of the day all that matters to me is how fast and well these pens write on ruled Moleskine paper, because it\’s all about actually using the pen. A lot.