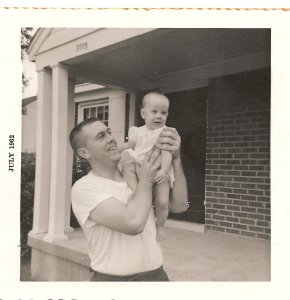 (This is a letter I wrote to my father a couple of years ago. I just ran across it, reread it, and realized that the tribute I wanted to write tonight was already written. Happy Father’s Day, Pop.)

At a National Writing Project leadership meeting a couple of weeks ago, Stephanie offhandedly asked us whether we thought of ourselves as writers who teach or as writing teachers who write. The question became much bigger than the moment, and I’ve been struggling with it each day since.

My first reaction was to say, of course, I’m a teacher first. The writing has always been there in the background as something I’ve done since I was a little girl. So the question at first felt like she was asking whether I was a teacher or someone who breathed. It seemed like an odd thing to ask.

But it wasn’t, and I think it may be the most important question of my life: Am I a writer who teaches, or a writing teacher who writes?

And I thought about what it is I that I do, instead of all of the things that I really wish I did. At the bottom of the question is the fact that I really can’t separate teaching and writing, can’t be primarily one or the other. I’m minimizing the struggle it took to come to this conclusion, but it was the process of questioning that became most important. I had to look at my life as it’s been and it is now and how I eventually want it to be.

And while I was in the process of deliberating my purpose, Mom mentioned that you’d been throwing the ball around on the practice field with some of the players. She was nonplussed, as Mom is sometimes, that you’d take a chance with your health to goof off with a few football players for no apparent reason. That’s her job as the Keeper of Our Physical Well-Being.

But she missed the moment, I think. I wasn’t there, but I know you, and the writer in me allows me to clearly imagine the old athlete in you loving the feel of the leather in your hands, fingers adjusting to the laces just so, firing a few well-aimed passes to reawaken the muscle-memory of what makes you feel strong. The Game. I also know, without even being there, that at some point you stopped passing the ball and began giving pointers, encouragement. That’s who you are. You ache for the feel of the ball, but can’t help coaching. They are one thing for you, symbiotic.

So when I began looking at my life as it’s been, I started with you: in the classroom and on the field with the junior high kids, later at Hendrix and UCA and Henderson and Austin College doing the same thing at another level. When you went to J.A. Riggs it wasn’t football, but it stuck for twenty-some years – a career choice I didn’t understand until you were at the end of it and I realized that despite your job title you were in charge of training salesmen and bringing in a new generation to the family business. You were, after all, coaching.

So now, as the Athletic Director when you could comfortably be retired instead, you’re throwing the ball around. And what I’ve discovered about you is that no matter what job, no matter what school or company or position, you are a coach. There really is no escaping who you are at the very core.

You were my coach, in fact, because the best parenting should be coaching. I do this with my own daughter, and it’s both my largest frustration and my singular joy. Coaching is hard because it’s a daily exercise in achieving endless patience. Teaching is something altogether different; it involves gathering knowledge that you then give to students like a present, and wait until they return it to you. Teaching involves written judgments handed our in red marks on papers or letters etched across report cards every six weeks. Teaching says, “I gave you the information and you got it, or didn’t get it.” End of story.

Coaching isn’t teaching. There is no way a coach can do the job without getting his own hands on the ball and demonstrating, pass after pass. Coaching actually requires that students begin imperfectly, and then pass after awkward pass, fumble after fumble, the student learns the feel of the ball, the arc of the run, the timing of the turn to complete the pass. Coaching allows the student proficience that appears to come out of themselves, because that is the ultimate goal of coaching – to hand over the delight of something successfully learned and see the student bloom in their own knowledge. The judging will always come from the students’ own hit or miss experience and is forever changeable because there is always one more game, one more opportunity to get it right. The glorious thing about coaching is letting go of the student, watching them become more than themselves and many times more than the coach. There is poetry in that moment when the student surpasses themselves and you. A true coach never feels less because he understood the whole time that surpassing was the point to begin with, that watching your students find inner and outer greatness is the entire reward. It’s a trophy-less game, but the trophy only matters to people who aren’t truly coaching.

I learned this from you, not because you taught it to me, but because you were the best coach I ever had. You coached me by demonstrating your life, then handed me the ball so I could, pass after pass, fumble after fumble, get it right and make the game my own. And finding this out has answered the big question for me. Because of you, I’m a writing coach who writes. Like you, I suspect that no matter what job I choose I’ll always, at my core, only find my life complete when I’m coaching students into their writing lives. Sure I’m a writer – always have been. There’s incredible joy in making the pen fly across the paper and tell the story that needs telling in the way I want to tell it. The important thing is that while I love it, it’s just not enough. Without the coaching I’d be just jangling around by myself in full pads with a loose chinstrap looking for a game.

I just wanted you to know that, in aching over what should have been a casual question and instead became the most important decision of my life, the example that is your life helped me make it. I know who I am because I found out who you are.

5 thoughts on “Letter to my Hero”