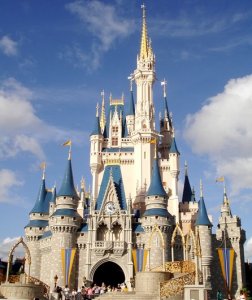 My parents are at Disney World. Right now. Just the idea makes me smile because my father is absolutely the biggest kid on the planet. Pop may be 68, but in his heart he’s still a teenager.

My folks never go on vacation, and never is a very long time. As a young thing, I remember traveling to San Francisco to see my grandparents, but those were never really vacations. We never camped, never visited exotic locations, never took a weekend to do something just for fun, ever. Once Pop finished coaching football there were things called vacations, but were usually “bring your wife” out-of-town meetings.

But right now my parents are on vacation, and they’re at The Happiest Place On Earth.

This trip, completely arranged and such by my Sis and her family, is quite a step for my folks. They’ve been officially retired for about a year or so, but nothing is as official as this trip – A Vacation Without A Business Purpose. Ta-da. Retirement. Lollygagging. I can’t wait to see the pictures.

Now, our crew did Disney years ago. It was the ultimate redneck road trip because I was married to one of those at the time. Aside from the hurricane and the incident when Jiminey Cricket became handsy with my daughter, it was a blast. Don’t worry, the undercover Disney Police were able to subdue my 6’5″ policeman husband before any real blood was spilled. That’s a story all by itself and for another time, but the point is when considering four days at Disney with the kids, only youth is on your side. It’s whirling and frantic and awe-inspiring and outrageously expensive, but none of that compares to the true decathalon of a Disney vacation. Ultimately the best time to go isn’t when the kids are old enough to appreciate it, it’s when you’re young enough to endure the pace.

I hope they find Mom one of those zoomy mobile-chairs so she can appreciate all the Disney delights while toodling around, queen-like. Really, all they need to do is drop her off in Epcot Center with a fannypack full of credit cards. I know what my mama’s heaven looks like.

I’m convinced they’re having an unforgettable Magical Kingdom time, those two. After 47 years, it was time for a throw-down vacation. And you can bet mama’s keeping a close watch on that Jiminey Cricket the whole time.

* Strange is actually my maiden name. Make fun all you want, I’ve already heard it all.

4 thoughts on “The Stranges Do Disney *”