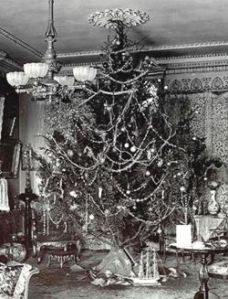 The thing about the Christmas tree being all lovely and twinkly and such is that removing it makes the house too drab to live in. That’s what I’m going to tell everyone who drops by my house in, say, February and finds us still Holiday Festive in the living room.
When I lived in the older part of downtown, such things didn’t really matter. Everyone down there is eccentric and no one thinks a thing about it. So what if your house is still dripping flashing icicle lights after Spring Break? Those old turn-of-the-(other)-century Victorian monuments are charming with a little off-season bling. Kind of like my grandmother wearing a tiara just because. The point is, when you live in a quaint old house, it’s adorable.
I don’t live there anymore. Don’t get me wrong, there’s a certain comfort that comes with a new house and its reliable plumbing, electricity, roof, and trees. Yes, trees. Downtown, I had monstrous, ancient trees that sloughed limbs at surprising intervals. They look a lot smaller when they’re forty feet up in the air – a lot like the Hindenburg, which looked like a small silver football until it hit. The collateral damage was similar. I don’t miss the bats, either.
My new neighborhood is a circle instead of a block, and has a Homeowner’s Association complete with dues and rules and pinched-faced retirees who are terribly concerned about dog poop. They can also get worked up about whether or not someone’s gutters are cleaned out regularly. A forgotten string of Christmas lights twinkling softly over the front porch in, say, February might actually get me a little jail time.
The tree stays, and I plan to turn it on every single night. If the lights last long enough, I’m going to redecorate it for St. Patrick’s Day, open the blinds, and let it scream neon-green across the whole of subdivision/suburbia.

3 thoughts on “My rebellion’s getting mighty lame”